Multiple journalists, prominent news organisations and rights organisations were targeted in raids on 16 July as the government’s crackdown on independent media and civil society continued.

This statement was originally published on baj.by on 16 July 2021.

Multiple journalists and prominent news organizations were targeted in raids on Friday as the government’s crackdown on the independent media showed no signs of abating.

Masked plainclothesmen raided the Minsk office of RFE/RL’s Belarusian service, breaking down its door and taking away computers.

In addition, NGO activists continued to be targeted in raids on Friday. In particular, searches were conducted at the homes of Maryna Dubina, director of an environmental group called Ecodom, and of Halina Uscinava, a member of the board of Pravavaja Inicyjatyva (Legal Initiative), a human rights group. Belarus: Ukrainian journalist Dzianis Ivashyn sentenced to 13 years and one month in prison

The KGB accused Ivashyn of cooperating with Ukrainian intelligence after he investigated the Belarusian police’s recruitment of former Ukrainian riot officers. Ivashyn was charged with “treason” and “interference in the activities of an employee of internal affairs”. 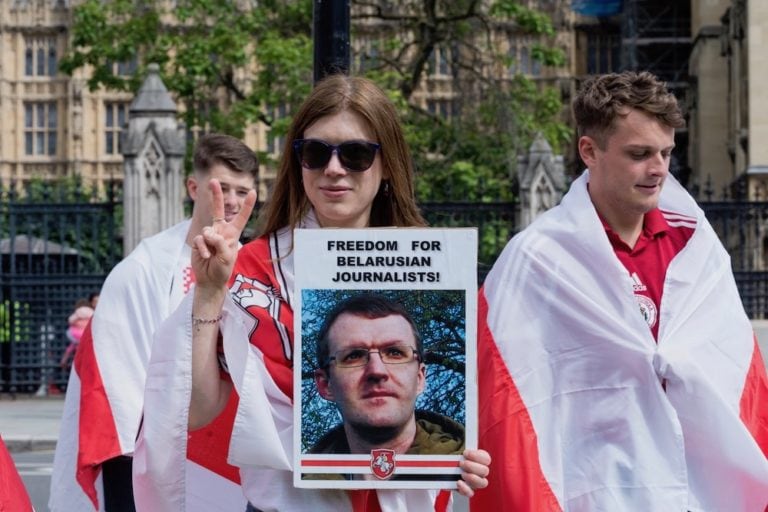 Arrested in March 2021 and facing up to three years in prison if convicted on the dubious charge of “interference in the activities of an internal affairs officer”, Ivashyn has spent part of his detention in solitary confinement, where he also suffered a heart attack. In 2020, Belsat TV journalist Darya Chultsova was convicted – along with journalist Katsaryna Andreyeva – of dubious public order offences after she covered anti-Lukashenka protests in Minsk.