A police officer stands next to a portrait of teacher Samuel Paty on display on the facade of the Opera Comedie, in Montpellier, France, 21 October 2020, PASCAL GUYOT/AFP via Getty Images

October in Europe and Central Asia: A free expression round up produced by IFEX's Regional Editor Cathal Sheerin, based on IFEX member reports and news from the region.

France: “We will not give up cartoons”

The most shocking news in October was the horrific murder of teacher Samuel Paty in France. Paty was killed in the street after he showed his pupils cartoons of the Prophet Mohammed (taken from the satirical magazine Charlie Hebdo) during a class on freedom of expression.

According to news reports, the attacker stabbed Paty multiple times and beheaded him; he then posted pictures of the victim on his Twitter account along with insults to President Macron and French “infidels” and “dogs”. When police approached the attacker he reportedly fired an air pistol at them; they returned fire and shot him dead. Ten of the attacker’s associates, including family members, were arrested as police said they were investigating links to Islamic extremism.

IFEX members ARTICLE 19 and Index on Censorship condemned the murder as an attack on freedom of expression, as did European leaders and other voices across Europe.

The killing of Paty came weeks after another attack by an Islamic extremist in September, when two media workers were stabbed outside the former Paris offices of Charlie Hebdo. The arrested attacker admitted that he had been trying to target the magazine. Earlier that month, the trial began of 14 people implicated in the 2015 mass shooting of Charlie Hebdo staff by Islamic extremists.

Paty’s murder took place less than three weeks after President Macron announced plans for a new law against religious “separatism”. One aim of this law is to reduce “foreign influence” on Islam in France. Several Muslim groups have criticised Macron’s plans, arguing that Muslims are once again being singled out for special treatment. At a public tribute to Paty after the killing, Macron reaffirmed France’s commitment to freedom of expression and declared, “We will not give up cartoons, drawings, even if others back down”.

Macron’s stance has stirred anger in some predominantly Muslim countries, where there have been protests and calls to boycott French goods. The Organization of Islamic Cooperation announced that it condemned acts of terrorism in the name of religion but that it also denounced mockery of any of the prophets of Islam, Christianity and Judaism.

The Organization of Islamic Cooperation is surprised by the official political discourse of some French officials, which hurts French-Islamic relations. #France pic.twitter.com/7w7G9TIapg

There has been tension between President Erdoğan of Turkey and Macron since the latter announced his tougher stance on radical Islam, and Erdoğan has been one of the most prominent voices calling for a boycott of French goods. These tensions increased further in late October when Charlie Hebdo published a cartoon of the Turkish president lifting the dress of a veiled woman. Erdoğan pledged “legal, diplomatic actions” in response.

Europe to take action on SLAPPs

There was promising news in October when the European Commission announced, in the publication of its Work Programme 2021, that it would take action to protect journalists against Strategic Lawsuits Against Public Participation (SLAPPs).

2⃣/3⃣ Our democracy needs watchdogs; it needs free and pluralistic media. Under the #WorkProgramme 2021 we will take action to protect journalists and rights defenders against abusive litigation. #SLAPP

These lawsuits – brought by the wealthy against journalists working in the public interest – are particularly cynical attempts to tie up journalists in complex, hugely expensive disputes with the aim of halting their work. It’s not clear yet what action the European Commission will take to address the problem of SLAPPs, but IFEX members and other rights groups have been calling for an EU-wide anti-SLAPP directive.

The Council of Europe’s Commissioner for Human Rights, Dunja Mijatović, also weighed in on the subject this month. She published an excellent op-ed (citing a statement signed by IFEX members and others) in which she proposed the following threefold approach to countering SLAPPs:

While this practice primarily affects the right to FoE,it also has a dramatic impact on public interest activities:it discourages the exercise of other fundamental freedoms such as the right to freedom of assembly & association&undermines the work of human rights defenders.#SLAPP https://t.co/2djM9qLM8h

Examples abound of the use of SLAPPs to intimidate journalists into silence. This month, IFEX members and others highlighted the case in Slovenia of investigative news website Necenzurirano, three of whose reporters have been hit with 39 criminal law suits by Rok Snežić, a tax expert and unofficial financial advisor to Prime Minister Janez Janša.

However, the most famous case is that of Daphne Caruana Galizia, who was murdered in Malta in 2017 because of her work exposing corruption. Flutura Kusari, legal advisor at the European Centre for Press and Media Freedom, posted an excellent Twitter thread this month detailing Caruana Galizia’s experience of SLAPPS: during her life as a journalist, Caruana Galizia had 67 defamation lawsuits filed against her; at the time of her death, she was facing 47 lawsuits; currently, there are still 25 active defamation suits against the late journalist.

Still wondering what SLAPPs lawsuits are? According to the official online case management system for Malta courts, there are still 25 active defamation cases against #DaphneCaruanaGalizia.

Women’s reproductive rights suffered another serious blow in October when Poland’s Constitutional Tribunal ruled that abortion due to foetal defects was unconstitutional. This removed the most common of the few legal grounds for abortion in the country. Abortion will now only be permissible in cases of rape, incest or a threat to the mother’s health: until now, these grounds accounted for only 2% of all legal abortions in Poland.

The ruling was immediately condemned by rights groups, including Human Rights Watch and Amnesty International, and by UN experts and the Council of Europe’s Commissioner for Human Rights.

Removing the basis for almost all legal abortions in #Poland amounts to a ban & violates #HumanRights. Today’s ruling of the Constitutional Court means underground/abroad abortions for those who can afford & even greater ordeal for all others. A sad day for #WomensRights.

Thousands of women took to the streets in cities across Poland to protest the decision. Many demonstrated outside premises belonging to the ruling Law and Justice Party (PiS) – which for years has been working to roll back women’s and LGBTQI+ rights – and churches. Hundreds gathered outside the house of Jarosław Kaczyński, the leader of PiS, to make their voices heard; they were met by riot police and pepper spray.

Even before the October ruling, Poland’s abortion laws were some of the most restrictive in Europe, resulting in an estimated 150,000 illegal abortions being carried out annually and approximately 20,000 women going abroad each year to terminate a pregnancy. Polish lawmakers also passed legislation restricting access to emergency contraception in 2017.

Demonstrations against the Constitutional Tribunal’s ruling are ongoing, with women MPs also taking part. When left-wing lawmakers protested the decision in parliament, this is how pro-PiS state TV framed it:

It would be an understatement to say that October was a tumultuous month for Kyrgyzstan: back in September, its president was Sooronbay Zheenbekov and its prime minister Kubatbek Boronov; by mid-October, both these positions were held by Sadyr Japarov, a former member of parliament whose supporters sprung him from prison during the unrest that followed the disputed (and now voided) parliamentary elections on 4 October.

The days following the vote saw mass protests in the streets, brutal fighting between rival political factions, violent clashes between protesters and police, an occupation of parliament by demonstrators, one former president shot at, a state of emergency declared, one person killed and over a thousand others injured.

Boronov resigned as prime minister on 6 October, after the opposition declared that it had seized power. Zheenbekov resigned as president on 15 October after Japarov’s supporters threatened to storm the presidential palace.

During the early days of this chaos, numerous journalists and press outlets were attacked or threatened by police and others. Human Rights Watch called on the authorities to respect fundamental rights while restoring order.

New elections were scheduled for 6 November, but lawmakers then voted to postpone them, whilst also approving a proposal to overhaul the constitution.

In Belarus, the huge, overwhelmingly peaceful protests against President Lukashenka’s regime continue – as does the brutal response by state authorities.

❗️A video from a prison van has emerged which shows how Lukashenko's police treat detainees: pic.twitter.com/zwEZGTaEgF

October saw the 2020 Sakharov Prize for Freedom of Thought awarded to Belarus’s democratic opposition (which includes the Coordination Council – formed after the rigged presidential election in August – and other prominent civil society figures). The month once again saw many hundreds of protesters arrested, including workers planning to take part in a national strike; it also saw the popular Telegram channel NEXTA designated “extremist” by the authorities (NEXTA is an independent news resource that shares videos and photos related to the protests).

The Belarusian Association of Journalists, in collaboration with other rights groups, this month produced a detailed report on the human rights situation in Belarus post-election – please check it out.

The ongoing fighting between Armenia and Azerbaijan over the Nagorno Karabakh region has seen multiple journalists wounded, attacked or harassed for doing their job. This month IFEX members and other press freedom groups issued a statement calling on both states to abide by their obligations in accordance with International Humanitarian Law and International Human Rights Law to protect journalists in conflict situations. Allegations have recently been made by a mob leader in connection with the murders of investigative journalists Uğur Mumcu and Kutlu Adalı, killed in Turkey and Northern Cyprus in 1993 and 1996, respectively. 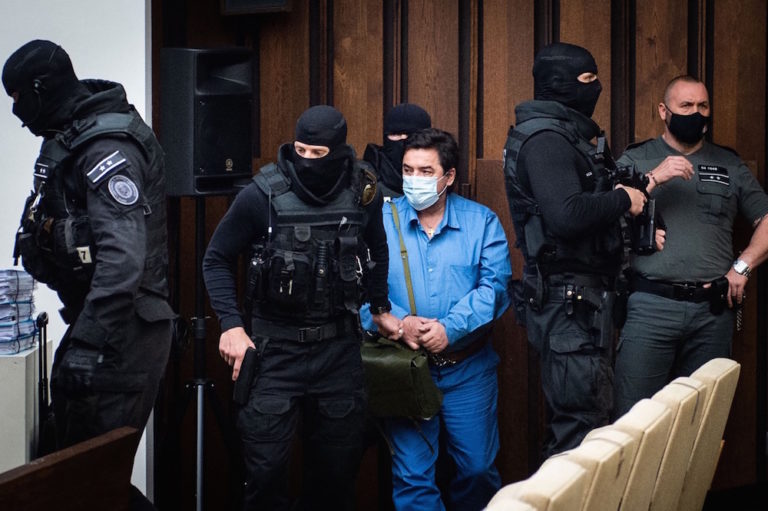 Last summer, the businessman Marian Kočner and his confidante, Alena Zsuzsová, were acquitted of ordering Kuciak’s murder in February 2018. After reviewing new evidence on 15 June 2021, the Supreme Court remanded the case back for a retrial. Those who investigate the government’s actions with regard to Islamic State, the arms it has sent to Syria, or abuses by the security forces are systematically accused of “espionage,” “terrorist propaganda,” “defaming” the judicial system or the security forces or even “attacking an anti-terrorism agent.”