CMFR statement on the killings in Maguindanao

The brutality and sheer senselessness of the attack represent a new low, even in the country's shameful record of violence, notes CMFR.

(CMFR/IFEX) – Politics is writ large in the November 23 abduction and killing of over 40 people, at least 12 of them journalists. The brutality and the sheer senselessness of the attack in Maguindanao represent a new low, even in the country’s shameful record of violence. It calls for collective outrage and condemnation and the strongest demand for the immediate apprehension, trial and punishment of those responsible.

The violent attack struck at the heart of the country’s democratic forces – local politicians, lawyers, women and journalists. The call for justice must come from all both here and abroad who believe that democracy must be strengthened in the Philippines.

Twelve of the over 40 people killed were journalists. Several of them were tortured. The women among them were raped. These murders have increased the number of journalists killed in the line of duty this year from 3 to 15 and added so many more to the 81 already killed in the Philippines since 1986.

The journalists were covering the wife, sisters, and followers of a local politician, a vice-mayor seeking to run for a gubernatorial seat, who were on their way to file his certificate of candidacy (COC) in the provincial office of the Commission on Elections in Shariff Aguak town. Local elections are as hotly contested as the national ballot and violence in the 2010 elections have already been flagged for all journalists who will be covering them.

These killings are likely to trigger a cycle of reprisals and counter-reprisals that will raise even higher the levels of violence in Maguindanao, quite possibly in the rest of Mindanao, and even the entire Philippines itself. Violence has a way of begetting further violence, as Philippine experience demonstrates.

Indeed, the Maguindanao attack was not only an attack on a local politician, on his supporters, and on journalists. It was also an attack on what’s left of Philippine democracy, in which free and peaceful elections have never been as urgent an imperative as today. Only the quickest and most decisive response in terms of arresting and bringing the perpetrators to court can prevent the November 23 killings from turning into one more incident to inspire the killers – of journalists, political activists, local officials, priests, lawyers and judges – who roam this country with impunity to keep on killing.

But President Gloria Macapagal Arroyo has declared a state of emergency in Maguindanao, Sultan Kudarat, and Cotabato City, in tacit admission that neither the military nor the Philippine National Police can cope with the situation without being armed with special powers.

We reject that supposed solution as an invitation to further violence as well as to the further abuse of the citizenry. The local military and police are widely known to be partial to certain groups, and are likely to harden that partisanship as elections in May 2010 nears. Indeed policemen are said to have been part of the group of 100 that waylaid the convoy the slain journalists were accompanying. A state of emergency will provide a convenient cover for military and police partisanship, among other reasons because it will provide them a legal basis for preventing the media from covering the impact on the citizenry of the political rivalries, based on clan disputes, that haunt Maguindanao and other areas of Mindanao as well as the overall conduct of the elections there.

We affirm that it is the media’s crucial task to provide the citizenry the information it needs so it can make such decisions as to who to vote for as well as others related to its well-being and safety. We reiterate, however, that no story is worth the life of a single journalist. Journalists must take the greatest care to assure their own safety, and to evaluate the risks involved before covering any event of public relevance anywhere.

Journalists must thus take care to steer clear of partisanships likely to transform them into casualties of the clash between political parties and feuding clans, and to affirm through their work and actions their sole loyalty to the professional and ethical imperatives of fairness and truth telling.

We mourn the death of our countrymen and colleagues in the hands of the barbaric horde that’s likely to be under the pay of the local politician’s rivals. But we must also remind the living never to underestimate the reality of the threats to their lives and well-being that have become common place in a country ruled by political forces who are unable to discharge, for both journalists and ordinary citizens, that most basic of State responsibilities, protecting every man, woman and child’s right to life and to a life without fear.

#HoldTheLine coalition welcomes reprieve for Maria Ressa, demands all other charges and cases be dropped

Despite the dropping of the second criminal cyberlibel case against “Rappler”‘s Maria Ressa, the Filipino-American journalist still faces eight other charges. Dozens of media groups and journalists in the Philippines have signed a statement rejecting the Anti-Terrorism Act of 2020 for containing provisions that “trample upon fundamental freedoms, including the freedom of the press.” 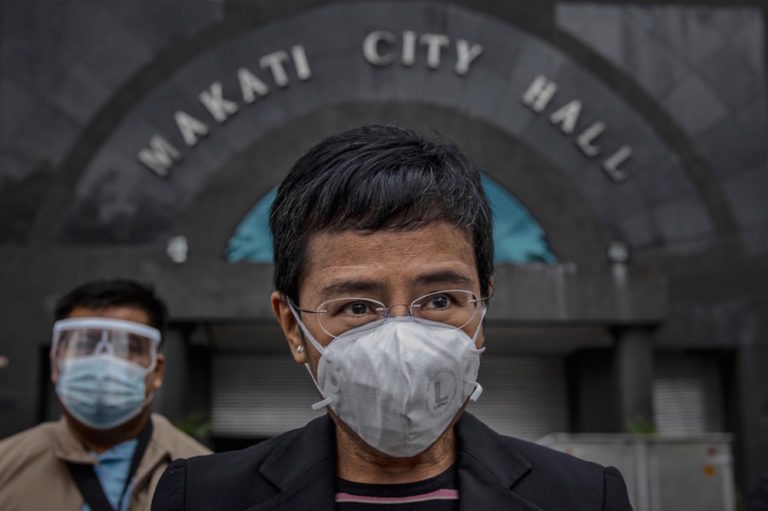