CCTV cameras installed on campuses were used to illegally monitor, sexually harass, and blackmail students at the University of Balochistan in Pakistan.

This statement was originally published on digitalrightsfoundation.pk on 17 October 2019.

Digital Rights Foundation (DRF) is alarmed by the incident of surveillance, blackmailing and harassment of female and male students in the University of Balochistan. We express solidarity with students protesting the incident and demanding accountability. The policing and surveillance of student bodies, particularly women, is condemned in the strongest possible terms and we call for strict action to be taken to ensure the dignity and safety of students on campuses across Pakistan.

Universities should ideally be spaces for critical thinking and freedom of expression, however due to neglect and regressive policies they have become spaces of harassment and repression for students. It is a well known fact that students’ bodies are regularly policed and surveilled by university administrations. Surveillance measures, justified under the pretext of safety to students were exasperated during the war on terror. Recently, CCTV cameras have been installed on campuses under the grab of anti-drug measures. It is unfortunate that the technology employed in the name of protecting students is often used to monitor and harass the very people it professes to protect. These systems of surveillance have become tools to monitor and silence dissent and political speech on campus, seen recently in the temporary expulsion of students from the University of Agriculture, Faisalabad, UAF for social media posts criticising the university administration.

Female, including feminised, bodies on campus are often subjected to the objectifying gaze of surveillance technology. Mechanisms and technology introduced under paternalistic logic results in the moral policing of women, restricting their right to gender expression and sexuality. Surveillance in public spaces such as campuses is rarely used to enable the freedoms of women, rather it tends to replicate paternalistic models of surveillance prevalent in private spaces, restricting their autonomy. There have been countless cases of data breaches from university databases in which women’s private information is weaponised to target and harass them. The women at the University of Balochistan know this all too well as they were blackmailed and harassed on the basis of their gender. Their consent was repeatedly violated as secret cameras installed by university administrative staff recorded videos of their activities without their knowledge.

It is imperative that we don’t look at cases of policing on campuses in a vacuum. While patriarchal norms and society inform this policing, the underlying infrastructure is laid out by authoritarian strands within the state and a global capital economy that profits from monitoring and dataveillance. This system is invested in not only creating consumers for capital but also to increasingly silence citizens by relinquishing their civil liberties.

The right to privacy is a constitutionally guaranteed fundamental right and an intrinsic part of citizen’s personal liberties. The Constitution of Pakistan enshrines the right to privacy as a fundamental right in Article 14(1) stating that “[t]he dignity of man and, subject to law, the privacy of home, shall be inviolable.” The University of Balochistan case is a gross infringement upon this very fundamental right of students. The incident also highlights the lack of redressal available for ordinary citizens to hold institutions accountable for violations of privacy. The fact that Pakistan does not have a robust personal data protection law means that there is no legal mechanism available to make the constitutional right to privacy justiciable.

While steps have been taken to investigate the incident, measures and safeguards should be in place to ensure that those responsible are held accountable. Additionally, the committee constituted by the provincial assembly of Balochistan to probe the matter lacks adequate gender representation, as only two members of the committee are women (notices to constitute the committee are attached as Annex A). We urge the government to guarantee the right to privacy of citizens by passing progressive data protection legislation. The draft Personal Data Protection Bill 2018 by the Ministry of Information Technology and Telecommunications is a positive step, but the legislation of the Act should be a consultative and inclusive process. We urge that women and gender minorities be placed at the center of any effort to provide protection to citizens. We welcome the announcement by the Chief Minister of Balochistan to constitute anti-harassment special committees in all universities across the province, however meaningful implementation will require regular follow-up and investing resources into the process. 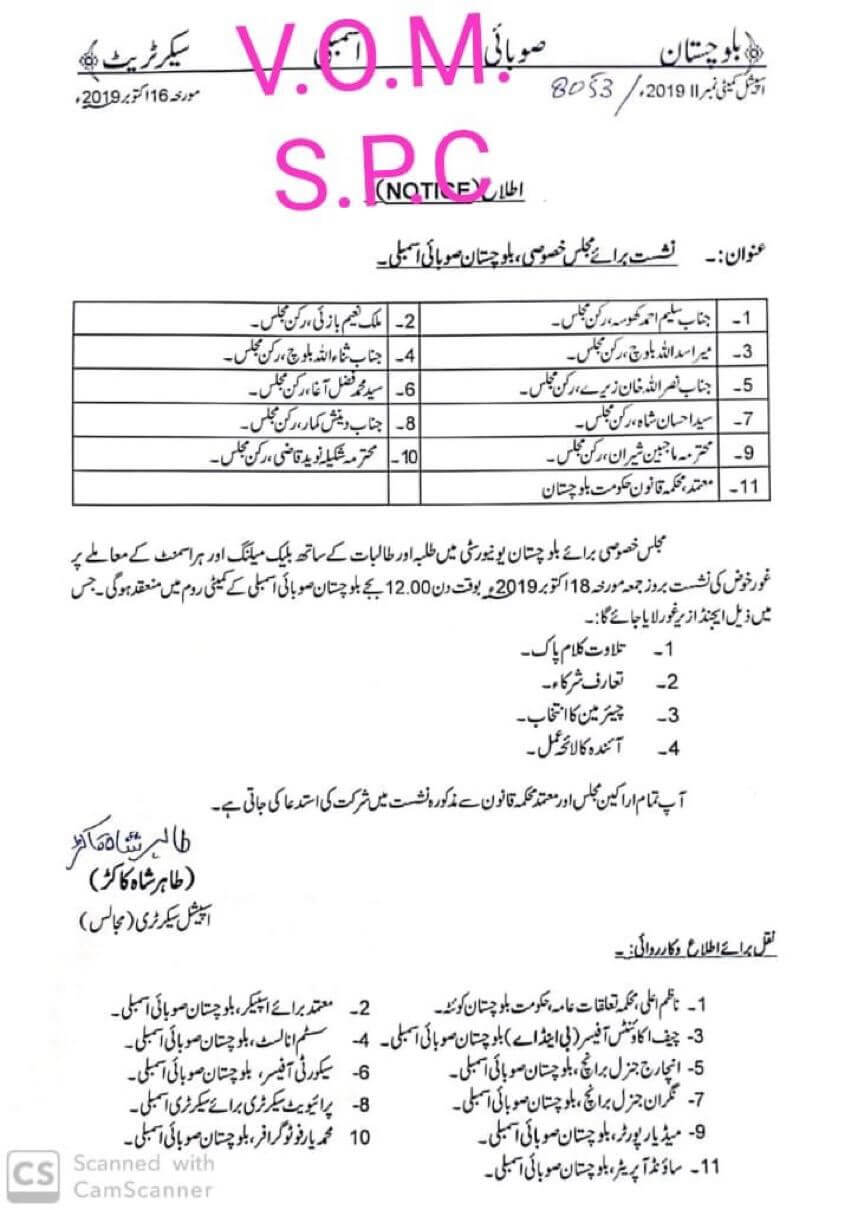 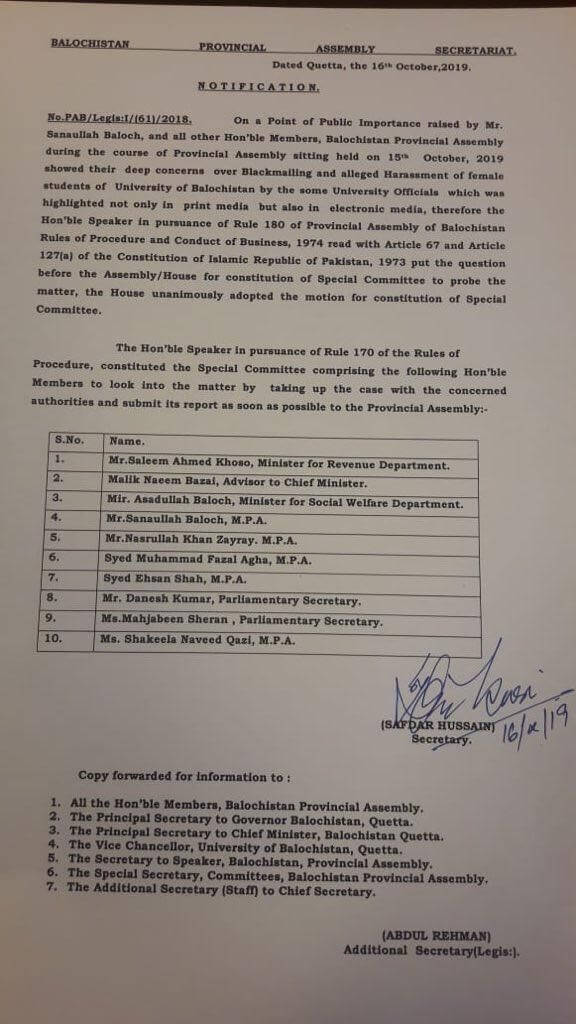