Bangladesh|Attacks
This article is more than 8 years old After being caught up in violent attacks by members of the Islamist group Jamat-e-Islami, more than 26 journalists and bloggers were injured.

(ARTICLE 19/IFEX) – More than 26 journalists and bloggers together with hundreds of law enforcement agents have today been injured after being caught up in violent attacks by members of the Islamist group Jamat-e-Islami targeting protesters known as the “Shahbag demonstrators” who are calling on Jamat-e-Islami leaders to face the death penalty for war crimes.

“ARTICLE 19 condemns Jamat-e-Islami for trying to crush criticism through violence. Although the death penalty is never acceptable, speech calling for war criminals to face such a punishment is legitimate and an expression of public anger over terrible war crimes that Bangladeshis have begun to punish after so many years of silence,” said Tahmina Rahman, director of ARTICLE 19 Bangladesh and South Asia.

“Jamat-e-Islami may not like the criticism they hear, but like everyone else, they should fight speech with more speech. It is particularly inflammatory for Jamat-e-Islami to try to incite violence by making all sorts of claims about god,” she added.

Clashes also erupted in other parts of the country including Jhenideh, Sylhet, Chittagong, Bogra and Moulvibazar.

The radical Islamist Jamat Shibir groups vandalised a Gonojagorn Mancha at Sylhet Shaheed Minar, prompting the police to open fire. Jamat Shibir men under the banner of Hifazat-e-Islam brought out a procession and later separated from the rally and marched towards the Gonojagoron Mancha in Rajshahi and damaged tables, banners and posters. Activists of Hefazate-e-Islam took to the streets in Chittagong and vandalised several houses at Jamal Khan Road in the port city on Friday afternoon.

They assaulted four newsmen at the Anderkilla intersection and ransacked and set fire to banners and placards in front of the press club where protesters were staging demonstration demanding death penalty to the war criminals. In Bogra, Jamat Shibir men under the banner of Towhidi Janata reduced the Gonojagoron Mancha to rubbles.

In Moulvibazar, Jamat Shibir men with activists of Khilafat Majlish attacked law enforcers at Choumohona Chattar after the Juma prayers and vandalised and torched banners and festoons of Gonojagoron Mancha at the Municipality Shishu Park.

With its back against the wall, the Jamat-e-Islami resorted to a weeklong smear campaign against the Shahbag youths lead by the Blogger and Activist Network, branding them as atheists and anti-Islamic.

ARTICLE 19 condemns in the strongest terms this organised attempt by Jamat Shibir and its affiliated groups to create anarchy across the country, attack on media, journalists and on peaceful demonstrators. We support the lawful demands of the Shahbag movement in upholding the historical legacy of secular spirit and tolerance.

We call on the government to take all necessary steps for the protection of the activists of Gono Jagoron Mancha, and ensure the safety and security of all citizens and their freedom of expression for lawful demands and protests. A new report by Human Rights Watch documents the cases of 86 victims in Bangladesh who were forcibly disappeared and who remain missing. 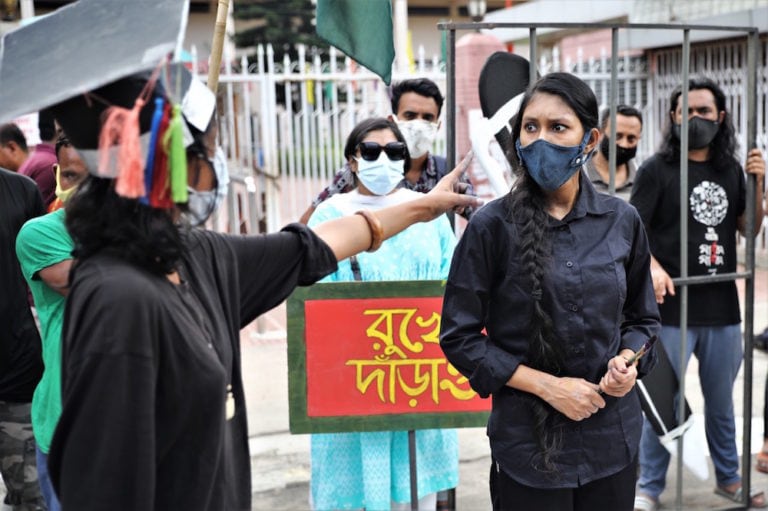