IFEX members and regional partners urge Malaysian MPs to ensure media laws are in line with international standards on online freedom of expression and access to information.

We, the undersigned organisations, express our collective concern over the proposed amendments to the Communications and Multimedia Act (CMA) 1998 in the Malaysian Parliament, which will have the impact of restricting the public’s right to freedom of expression and information online. We join the Centre for Independent Journalism (CIJ) and its Malaysian partners as well as the Southeast Asian Press Alliance (SEAPA) to call on all elected Members of Parliament to reject the proposed amendments.

The CMA is the main law regulating the Internet, broadcasting and telecommunications industries. Since 2009, it has been used to persecute bloggers, activists, journalists, academics, politicians and other individuals accused of publishing anti-government or anti-establishment content. In 2015 alone, there were 42 cases of investigation, charges or convictions under Section 211, which prohibits offensive content, and Section 233, which criminalises the “improper” use of network facilities or network service to publish content deemed to be obscene, indecent, false, menacing or offensive. For example, in October 2015, activist Khalid Mohd Ismath was charged on 14 counts for posting comments on social media, allegedly offensive of the Johor state royalty. Eleven of those charges were under Section 233 of the CMA.

Questioning or criticising the royalty, as well as the official religion (Islam) and the country’s governance, is considered a politically sensitive issue in Malaysia. Other CMA related cases include the government instructions to certain Internet Service Providers (ISPs) to block access to news websites like The Malaysian Insider, whistleblowing site the Sarawak Report, the Malaysian Chronicle and Asia Sentinel. Also blocked was the blog hosting platform, Medium, which published an article by Sarawak Report, and socio-political blogs OutSyed The Box, Din Turtle and Minaq Jingo Fotopages. These websites remain blocked in the country.

We are concerned over the lack of transparency in the government’s processes, as no specific information was provided on laws contravened or even the possibility of appeal. Actions by the state are clearly an assault on media freedom, freedom of information and Malaysia’s promise for a free Internet. The government’s actions appear to be part of a concerted and intensified effort to shut down dissenting views, particularly those questioning the integrity and leadership of Prime Minister Najib Razak. Government leaders and the country’s police chief have repeatedly warned the public on their use of social media as well as news websites that publish content seen as being critical of the establishment.

In addition to the registration of bloggers, we understand the amendments are expected to increase penalties for content-related offenses, and the powers of the Internet regulatory body – the Malaysian Communications and Multimedia Commission (MCMC) – to take down online content without proper oversight. We are concerned that the regulation will require additional infrastructure such as data retention of users by internet service or content providers, which would also act as cost and administrative barriers to small-scale or community-based enterprises.

We firmly support the coalition’s position that bodies like the MCMC should not have discretion to block content; instead, its actions should be governed by its ten policy objectives, including creating a vibrant civil community, establishing Malaysia as a major global centre and hub for communications and multimedia information and content services, and creating robust applications environment for end users. Decisions to restrict freedom of information and expression should follow due process of the law and international standards and norms. They should be clear, least restrictive, necessary and proportionate, and at minimum, require a court order.

We urge MPs to reject any repressive amendments to the law, and instead, ask them to call for an open, participatory and transparent consultation with all stakeholders to review existing laws to ensure they are in line with international standards on online freedom of expression and access to information. 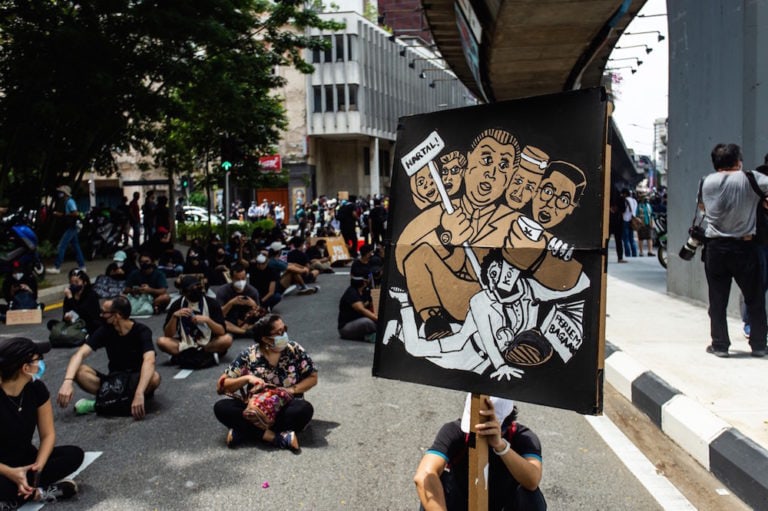 The police raided the office of Freedom Film Network over an animated film narrating the true story of a boy who experienced torture while in police custody. Various groups said the police should be held accountable for their actions. ARTICLE 19 issued a legal analysis of Malaysian Emergency (Essential Powers) (No. 2) Ordinance 2021 and warned that the Ordinance could prevent any criticism of the government’s COVID-19 response.