A man listens to the radio, in Lomé, Togo, 6 October 2016, Godong/Universal Images Group via Getty Images

This statement was originally published on mfwa.org on 17 February 2021.

Three journalists, Charles Kponwadan of the news website Horizon, Anani Vidzraku of Radio Victoire and Romuald Lansou of the Togoinfos web TV were arrested on February 3, 2021 and taken to the premises of the Golfe District Office by gendarmes for interviewing a very critical chief “without authorization”.

Komlan Agbotsè called in a gendarme on duty inside the district office, who questioned the journalists before leading them to the waiting room. The bodyguard of Komlan Agbotsè then seized the working materials of the three journalists as well as their cell phones. Their recordings were also deleted.

The district head later called the territorial gendarmerie, a few meters from the office, whose agents came to pick up the journalists and took them to Lomé. The journalists were taken to the Territorial Brigade of the National Gendarmerie in the capital, Lomé, where they underwent three hours of interrogation before being released.

All of the main media organisations in Togo denounce the arrest of the three journalists. For media organisations, in particular, the OTM, the CONAPP, the PPT, the ATOPPEL, the URATEL, the UJIT and the SYNJIT, “this attitude of the Golfe district head seriously harms the freedom to inform and condemns with the utmost rigor this aggression on journalists in the exercise of their profession.”

They recalled that under Togo’s constitution, “no one has the right to restrict” freedom of expression, considered “an essential pillar of democracy, by hiding behind any pretext whatsoever”.

They therefore called on the Togolese authorities to “do everything in their power to guarantee media professionals the free exercise of their profession”.

This act of the district head worries journalists who are recently confronted with the aggressiveness of the security forces and serial, disproportionate sanctions by the media regulator and the Court for the least error or misunderstanding.

The arrest of the three journalists comes 19 days after the license of the L’Indépendant Express newspaper was withdrawn and its publication banned indefinitely. The ban was ordered by the media regulator. The request was made following the publication of an article in which the said newspaper had accused some women ministers of stealing golden spoons during a reception, an article which earned the editor of the newspaper, Carlos Komlanvi Ketohou, three days in detention.

The Media Foundation for West Africa strongly condemns the arrest of journalists Charles Kponwadan, Anani Vidzraku and Romuald Lansou, and calls on the Togolese authorities to change attitudes towards journalists. The summons of chief Dagban-Ayivon for his criticisms of the government and the interrogation of the journalists demonstrate a will to silence critics, which violates article 19 of the Universal Declaration of Human Rights of which Togo is signatory. ‘There is no private life’: Three Togolese journalists react to being selected for spyware surveillance

Three Togolese journalists – Carlos Ketohou, Ferdinand Ayité, and Luc Abaki on the #PegasusProject list of potential targets – share their psychological experiences of what it means to be under surveillance. 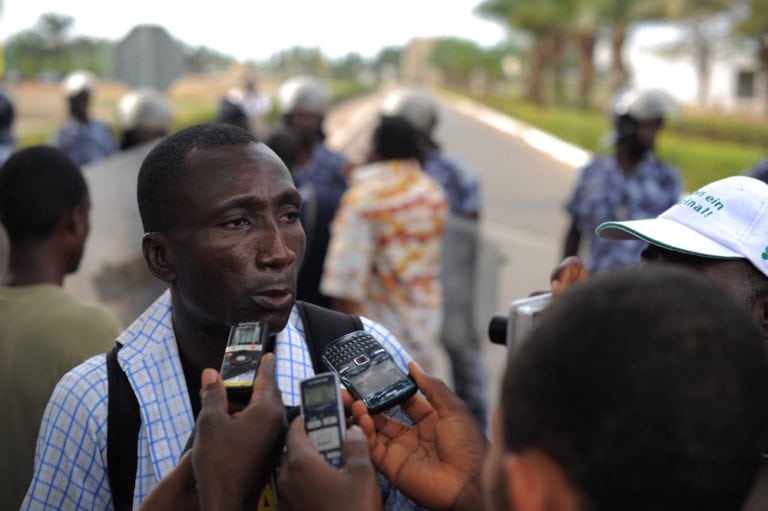 Togolese journalist Ferdinand Ayité is among 17 journalists from 7 countries who have filed a complaint with French prosecutors against the NSO Group for being a potential target of surveillance by their Pegasus spyware. Telecommunications companies, civic groups and state entities in Ghana, Togo and Cote d’Ivoire harness the power of technology in fighting the Covid-19 pandemic.