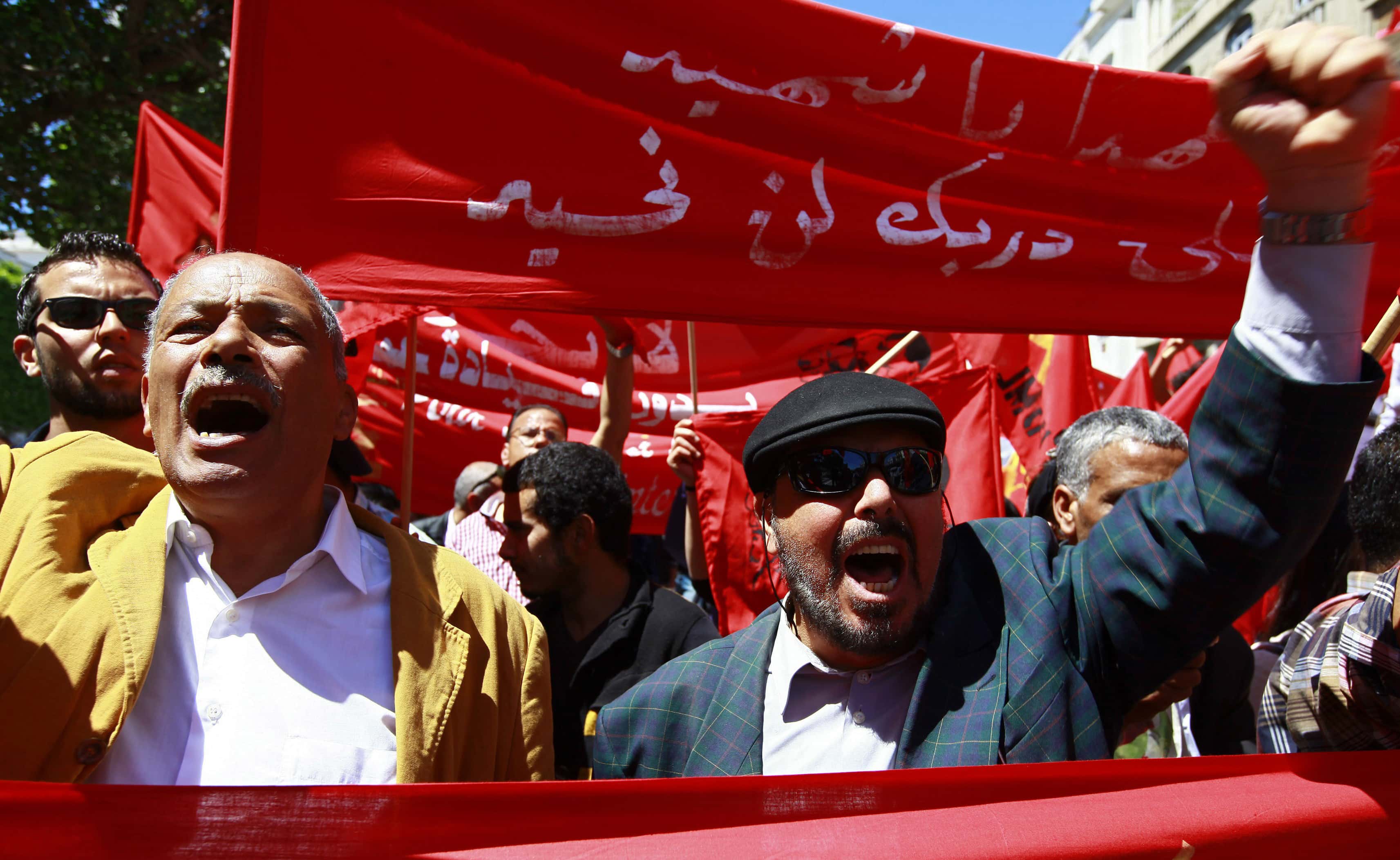 Tunisians march to commemorate International Workers’ Day, or Labour Day, on Avenue Habib Bourguiba in Tunis on 1 May 2014, REUTERS/Anis Mili

The Arabic Network for Human Rights Information (ANHRI) denounced on 4 May 2014 the physical and verbal assault on Tunisian journalists by members of the organising committee of the Tunisian General Labour Union (UGTT) at a protest organised on 1 May in honour of Labour Day. In advance of the protest, a number of Tunisian […]

The Arabic Network for Human Rights Information (ANHRI) denounced on 4 May 2014 the physical and verbal assault on Tunisian journalists by members of the organising committee of the Tunisian General Labour Union (UGTT) at a protest organised on 1 May in honour of Labour Day.

In advance of the protest, a number of Tunisian journalists were prevented from obtaining permits from the UGTT’s Secretary-General Hussein Abbas to cover the event. Once demonstrators reached Habib Bourguiba Avenue in the capital, members of the organising committee began to physically and verbally assault the journalists present in spite of the objections of the secretary-general’s and the UGTT’s media representative, Ghassan Al-Gosaibi.

Twelve journalists reported being beaten by members of the committee:

Members of the organising committee also verbally assaulted 15 other journalists. Their names are listed below:

“Collective assaults committed against journalists during their coverage of UGTT’s march are an indicator of the mounting violations committed against journalists in recent times,” said ANHRI. “All parties are involved in such violations, including the Tunisian security forces as well as citizens. Moreover, the march’s assaults refer to the government’s negligence to provide the necessary protection for journalists on the job. Such a matter threatens the steps that the government started to take on the path of democratic transition after the fall of Ben Ali’s regime.”

ANHRI calls upon Tunisian authorities to provide the necessary protection for journalists while practicing their work, in order to help them convey the complete truth without being subjected to pressure or attacks that could impede them from carrying out their work. ANHRI calls for an urgent investigation into the collective assaults on journalists on 1 May. It also calls for accordingly punishing the perpetrators of these assaults so as to guarantee that they will not be repeated again. The Committee to Protect Journalists condemns the raid and calls on authorities to unconditionally allow Al-Jazeera’s Tunis bureau to resume operations and let all journalists in the country work freely.