Russia has committed 428 crimes against the media in Ukraine A member of the press receives first aid in a cellar after he was injured during heavy shelling on a civilian area, in Siversk, Ukraine, 8 July 2022, Narciso Contreras/Anadolu Agency via Getty Images

As of 24 July, the Russian military have killed a total of 36 journalists in Ukraine, 8 while they were reporting. Fourteen journalists have been injured and four are missing.

This statement was originally published on imi.org.ua on 24 July 2022.

In the five months of the full-scale war, Russia has committed 428 crimes against journalists and the media in Ukraine. This is according to the monitoring conducted by the Institute of Mass Information.

As of July 24, the Russian military have killed a total of 36 journalists in Ukraine; of those, eight journalists were killed in the course of their work. 14 journalists have been injured.

IMI was able to establish that out of 14 journalists who went missing in Mariupol, the fate of three media workers remains unknown. The other 11 mostly left either for the territory controlled by Ukraine or abroad, the minority remains under occupation. So, as of July 24, four journalists are considered missing – three from Mariupol and Dmytro Khyliuk, who disappeared in the Kyiv region during the Russian occupation. 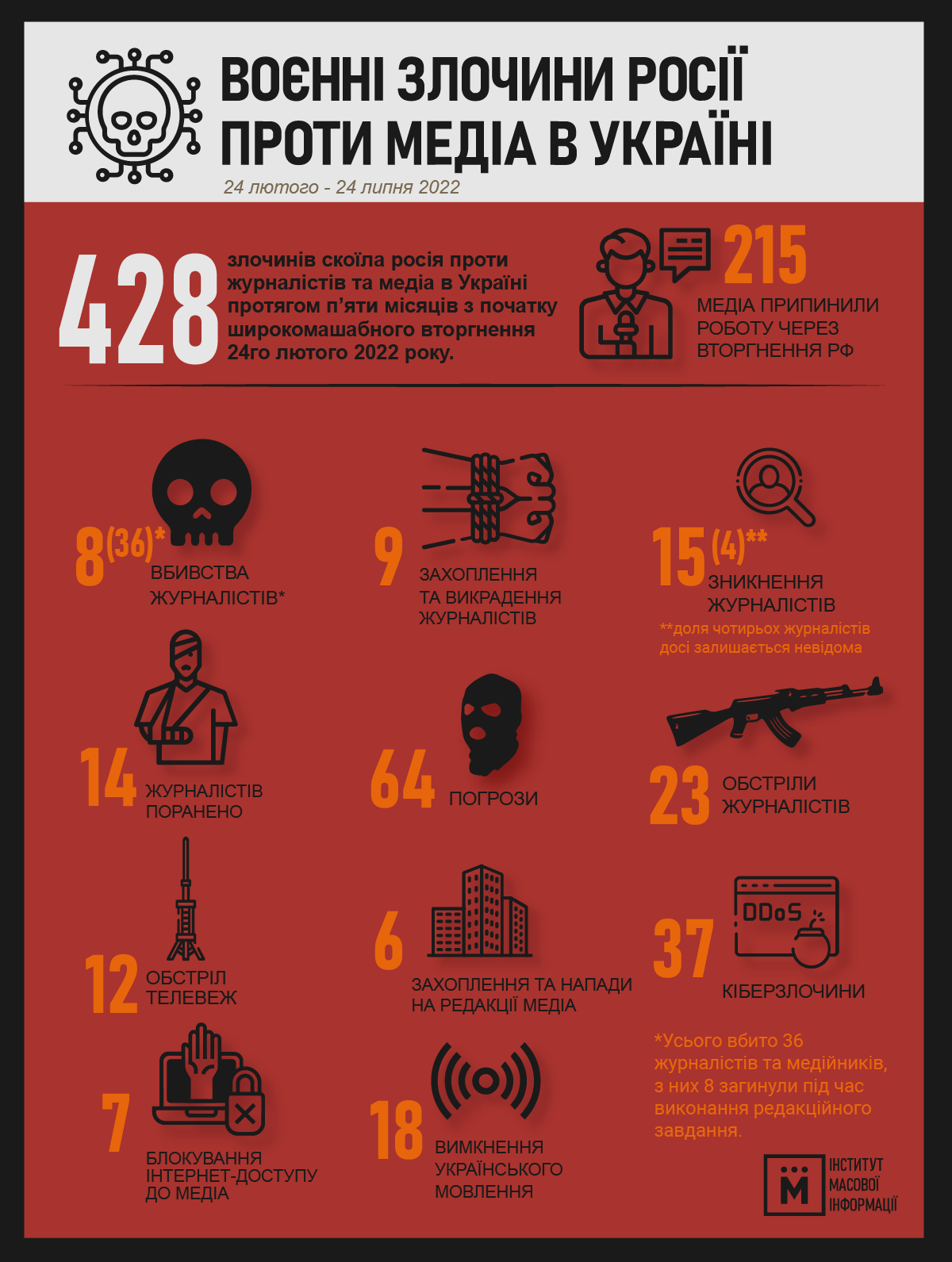 Eight journalists were killed by the Russians in the course of their work. Of those, three were Ukrianian citizens and five foreign ones. They were two women and six men.

28 media workers were killed as combatants or by Russian shelling, not in the course of their work.

July saw the death of three more media workers who had gone to defend Ukraine. They include Volodymyr Datsenko, journalist of the “Road Control Vinnytsia” NGO, volunteer and defender of Ukraine, who was killed by a missile strike on Vinnytsia on July 14. As well, the presenter for the musical TV channel M2 and an Armed Forces of Ukraine serviceman Karim Gulamov, who was killed on the front line. Mykola Rachok, InfoCar journalist, defender of Ukraine, was killed on the frontline.

In the fifth month of Russia’s full-scale war against Ukraine, IMI has recorded cases of firing on journalists, threats, cybercrimes, the blocking of access, and media outlets closing down due to the war.

The occupiers continue to threaten Ukrainian journalists. In total, IMI has recorded 64 cases of threats and harassment of journalists and the media. Namely, during the fifth month since the start of the full-scale war, editorial offices of the Zaporizhzhia publications 061.ua and inform.zp.ua have received threats from russia. There is nothing new in the threats, they are repeats: criminal prosecution and imprisonment. It should be noted that these media outlets have been receiving such threats for several months in a row.

In addition, hackers deleted the Facebook account of Prestupnosti.NET chief editor Anatoly Chubachenko and the media outlet’s YouTube channel. The editors believe that this is all the work of Russian special services or Russian hackers, since the attackers tied the hacked Facebook account and YouTube channel to Russian email addresses. According to the chief editor, the YouTube channel had many videos about captured Russian soldiers, the Ukrainian army destroying Russian equipment, and the media outlet actively supports Ukraine and debunks Russian fakes in every possible way. Also, … In video calls, a fake ‘Mayor Klitschko’ spoke with the mayors of Berlin, Vienna, Warsaw, and other cities, discussed details about Russia’s war in Ukraine – and called for people fleeing the war to be returned to Ukraine. Notorious Russian prank callers have claimed responsibility.