Yemen: Ongoing targeting of journalists and restrictions on press freedom This statement was originally published on gc4hr.org on 16 June 2022.

The Gulf Centre for Human Rights (GCHR) is concerned about ongoing attacks on freedom of expression in Yemen by all sides, including the imprisonment of journalists, some of whom face the death penalty for their work and the murder of journalists with car bombs. GCHR calls for the immediate and unconditional release of all detained journalists in Yemen, an immediate end to their murder, and for those responsible to be held accountable.

On 15 June 2022, journalist Saber Noman Al-Haidari, 42, correspondent of the Japanese NHK TV Channel, was killed after an explosive device planted in his car blew up in Al-Mansoura, a city located in Aden Governorate. Local sources confirmed the death of two other people and the injury of a fourth person with burns.

GCHR previously documented the killing on 9 November 2021 of journalist Rasha Abdullah Al-Harazi, 27, who was nine months’ pregnant, after an explosive device destroyed the car driven by her husband, journalist Mahmoud Al-Atmi, who was driving her to the hospital in Aden.

Journalist Younis Abdulsalam Ahmed Abdulrahman, who is from the city of Taiz and resides in the capital, Sana’a, is still in the custody of the Security and Intelligence Services, despite presenting a commercial guarantee provided by a well-known merchant for his release. Abdulrahman was arrested on the evening of 4 August 2021, after going out for a walk in order to relieve his suffering from depression, as documented by GCHR at the time.

He was forcibly disappeared for two weeks, and members of the Security and Intelligence Services repeatedly used his phone and his Facebook page for short periods. On 18 August 2021, the defense team that took charge of his case, managed to extract information from the Security and Intelligence Services which admitted that he was being detained by them, but they did not allow them to meet him until a month later, when he was permitted to meet for only a few minutes on 28 September 2021. They found him to be very tired after he had spent more than 80 days in a solitary cell.

After the first visit, Abdulrahman was denied visits for a month, after which visits became bi-monthly. On the last visit, he told his lawyers that he had been allegedly charged with “comunicating with outside parties.” This was followed by a request by the Security and Intelligence Services for a commercial guarantee for his release; yet he remains in detention despite having a commercial guarantee.

Abdulrahman was previously arrested on 17 August 2020 in the city of Aden by the Security Forces of the Southern Transitional Council, due to his opposition to the campaigns against citizens coming from northern Yemen. During his detention, he was tied up and beaten with rifle butts. Popular campaigns in his support forced the local authorities in Aden to release him after 24 hours.

GCHR calls for the immediate release of Abdulrahman, and pending his release, for the authorities to allow visits by his lawyer and family.

Since 23 May 2022, print copies of the first issue of “Al-Nasiyah” magazine were withheld, after being reprinted on the same day in Sana’a. “Al-Nasiyah” is a cultural and literary magazine founded in 2021 in the city of Aden, whose first issue is dedicated to peace. A number of writers, journalists and lawyers issued a statement calling for the release of copies of the magazine, and stated, “It is tragic that these parties, as they are fighting and reconciling, share a common goal to repress culture, the press and freedoms.” Amjad Cultural and Rights Foundation, which publishes the magazine, put the full statement on its Facebook page. Its entire first issue is available online here.

On 29 May 2022, four journalists, Abdel-Khaleq Ahmed Omran, Akram Saleh Al-Walidi, Al-Harith Saleh Hamed, and Tawfiq Muhammad Al-Mansoori, appeared before the Specialised Criminal Appeals Division in Sana’a. They have already been sentenced to death for espionage and spreading false news.

During this session, the defense team provided its comment on the Public Prosecution’s response to the defense regulations, and the hearing was postponed until 31 August 2022.

The four journalists were convicted on 11 April 2020 by the Specialised Criminal Court in Yemen’s capital Sana’a, which is controlled by Houthi authorities. They were sentenced to death on charges of spying and spreading false news.

In the early hours of 31 May 2022, journalist Obaid Saeed Waked was released by the Criminal Investigation Department, several hours after his arrest. The forces of the Criminal Investigation Department in the city of Mukalla, the centre of Hadhramaut Governorate in eastern Yemen, arrested him following a report submitted against him by the branch of the oil company on the coast of Hadramout, linked to a post on his Facebook page that he uses to express his opinions and the chronic problems facing citizens. During his detention, the security forces confiscated his mobile phones, prevented him from communicating with his family or his lawyer, and refused to release him on bail despite his compliance with the investigation. The solidarity campaigns of his colleagues, the rest of the citizens and civil society organisations, particularly the Yemeni Journalists Syndicate, contributed to his speedy release.

Also in Hadhramaut Governorate, on 30 May 2022, the Hadhramaut Criminal Court issued a one-year suspended prison sentence against journalist Awad Saleh Kashmeem, head of the Rights and Freedoms Committee of the Yemeni Journalists Syndicate in Hadhramaut. The ruling is related to the opinions that Kashmeem publishes in various media outlets, including his Facebook page.

On 31 May 2022, photojournalist Anwar al-Sharif was arrested in Al-Khoukha district, south of Al-Hodeidah, by the so-called National Resistance Forces led by the Presidential Council member Tariq Saleh, after he was accused of photographing a military area with a drone. Informed local sources confirmed that the filming incident took place in the vicinity of an ancient mosque, accompanied by the Director-General of the Cultural Office in the local government of Hodeidah Governorate. He was released on 2 June 2022.

Al-Sharif, a journalist, photographer and TV photographer, uses his Facebook page to post his photos, and he works for Al-Amin Humanitarian Aid.

GCHR calls on international mechanisms, including those of the United Nations, as well as the European Union and governments that have influence in Yemen, to continue advocating for all parties to the conflict to release all prisoners of conscience, including journalists; end the murders of journalists and hold accountable those responsible; respect press freedom; and stop detaining journalists, human rights defenders, academics, and online activists. They must emphasise the protection of public liberties and the liberties of civil and human citizens. Human rights defenders are targeted with arrests and harassment for their work, as citizens face unfair trials and executions. 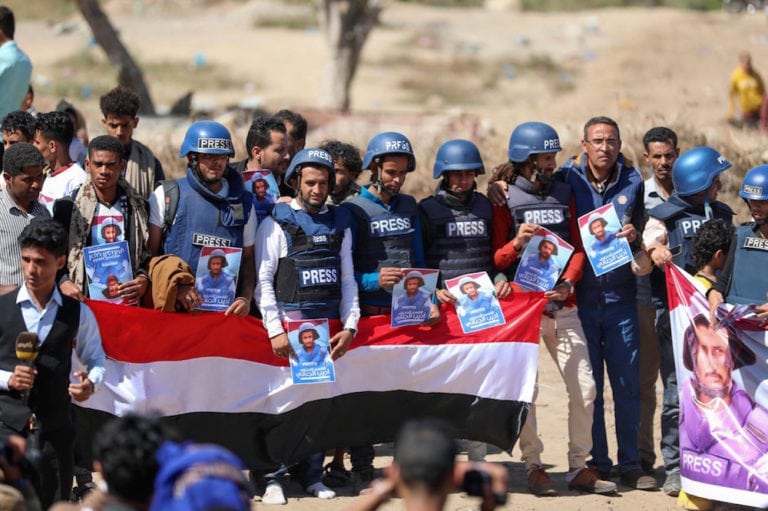 In one of the deadliest countries for journalists, Yemeni journalists displaced by the ongoing conflict speak to the Committee to Protect Journalists on the struggles of reporting on their country through displacement and exile.