Republic of Congo|Free Expression & the Law 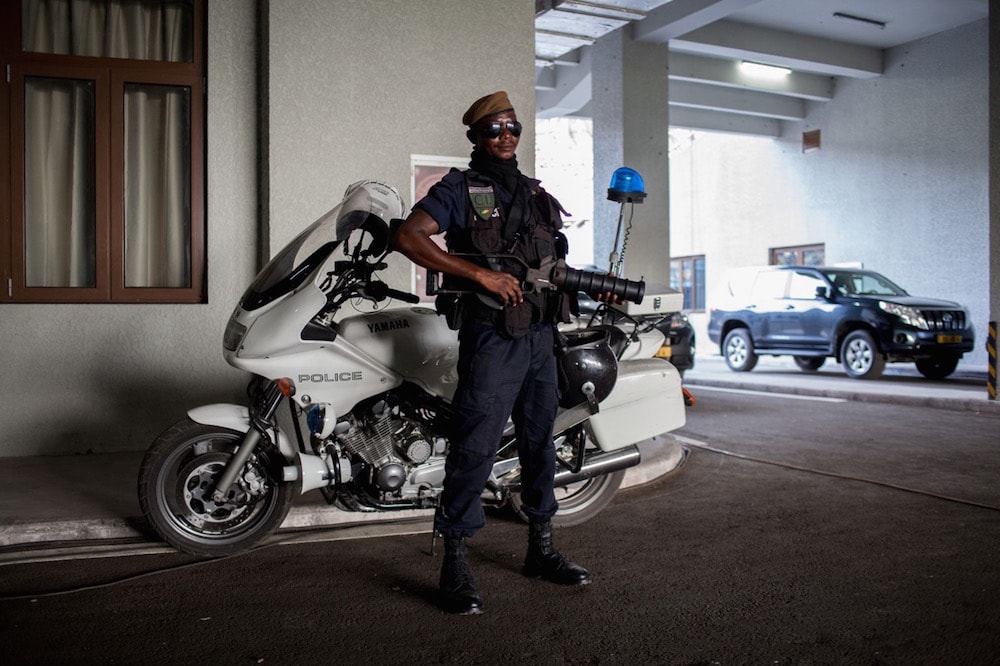 A policeman stands guard at a stadium in Brazzaville, Republic of Congo, 27 March 2016, FLORIAN PLAUCHEUR/AFP via Getty Images

Despite being seriously ill, Raymond Malonga continues to be held illegally by authorities in Brazzaville.

This statement was originally published on rsf.org on 5 March 2021.

Reporters Without Borders (RSF) reiterates its call for the release of a magazine publisher in Republic of Congo who is ill and has been held for more than a month on a defamation charge in violation of media legislation, although a presidential election campaign is now under way. This journalist should not be in prison, RSF said, urging the authorities to apply the law fairly.

The publisher of Sel-Piment, a satirical magazine that is very critical of the government, Raymond Malonga has been detained in Brazzaville since 2 February and his family are now very concerned for his physical well-being. “My father is ill and had been on a drip-feed at the hospital for several days when he was arrested,” his son told RSF, adding: “His health has not improved in prison.” The family regrets that attempts to mediate with the plaintiff have been unsuccessful. RSF first drew attention to the illegal nature of his detention three days after his arrest.

Malonga was arrested for printing a story from a website about embezzlement accusations against Georgette Okemba, the wife of Jean-Dominique “JDO” Okemba, who is the nephew of President Denis Sassou Nguesso. JDO heads the National Security Council, which oversees all of the Republic of Congo’s military and police services. The country’s president for 36 of the past 41 years, Nguesso is currently seeking yet another term in an election on 21 March.

Although accused solely of a press offence, Malonga was taken from his hospital bed to prison by intelligence officials.

“It is outrageous that a journalist accused of nothing more than defamation should have been snatched from his hospital bed, placed under arrest and jailed for more than a month regardless of the law and his health,” said Arnaud Froger, the head of RSF’s Africa desk. “This journalist’s arbitrary and prolonged detention in the middle of an election campaign sends a disastrous political signal. The law and institutions should prevail over the law of the strongest.”

Malonga’s lawyer told RSF that he hoped that a hearing would be held next week at which his client might finally be released. Under the Republic of Congo’s law on freedom of information and communication, journalists can only be given a prison sentence for defamation if they have a previous conviction, which is not the case with Malonga.

The country’s media regulator, the Higher Council for Freedom of Communication (CSLC), initially ordered Sel-Piment’s suspension, but the order has been lifted, the CSLC’s president told RSF.

Arrests of journalists are relatively infrequent in the Republic of Congo but, if they are singled out by authorities or by influential people close to the government, journalists are sometimes detained for a long time. The circumstances of Malonga’s arrest recall that of Ghys Fortuné Bemba, the publisher of the independent weekly Talassa, who was arrested by the intelligence services in January 2017, shortly after publishing an op-ed by a former rebel leader. Held for 18 months, he was finally released following an energetic campaign on his behalf in which RSF played a leading role. He then left the country for security reasons. In his book De l’enfer à la liberté (From hell to freedom), published in 2019, he described the appalling conditions in which he was held, which included solitary confinement without even being able to talk to guards, the lack of a toilet, water and electricity in his cell, and being denied adequate food.

The Republic of Congo, also known as Congo-Brazzaville, is ranked 118th out of 180 countries in RSF’s 2020 World Press Freedom Index.

Recent articles in Republic of Congo Having spent 3 months in detention, ailing journalist and editor Raymond Malonga was sentenced to a further 3 months on charges of defamation. Calls grow louder for the release of ailing Congo-Brazzaville journalist Raymond Malonga who has been in prison since February 2021.