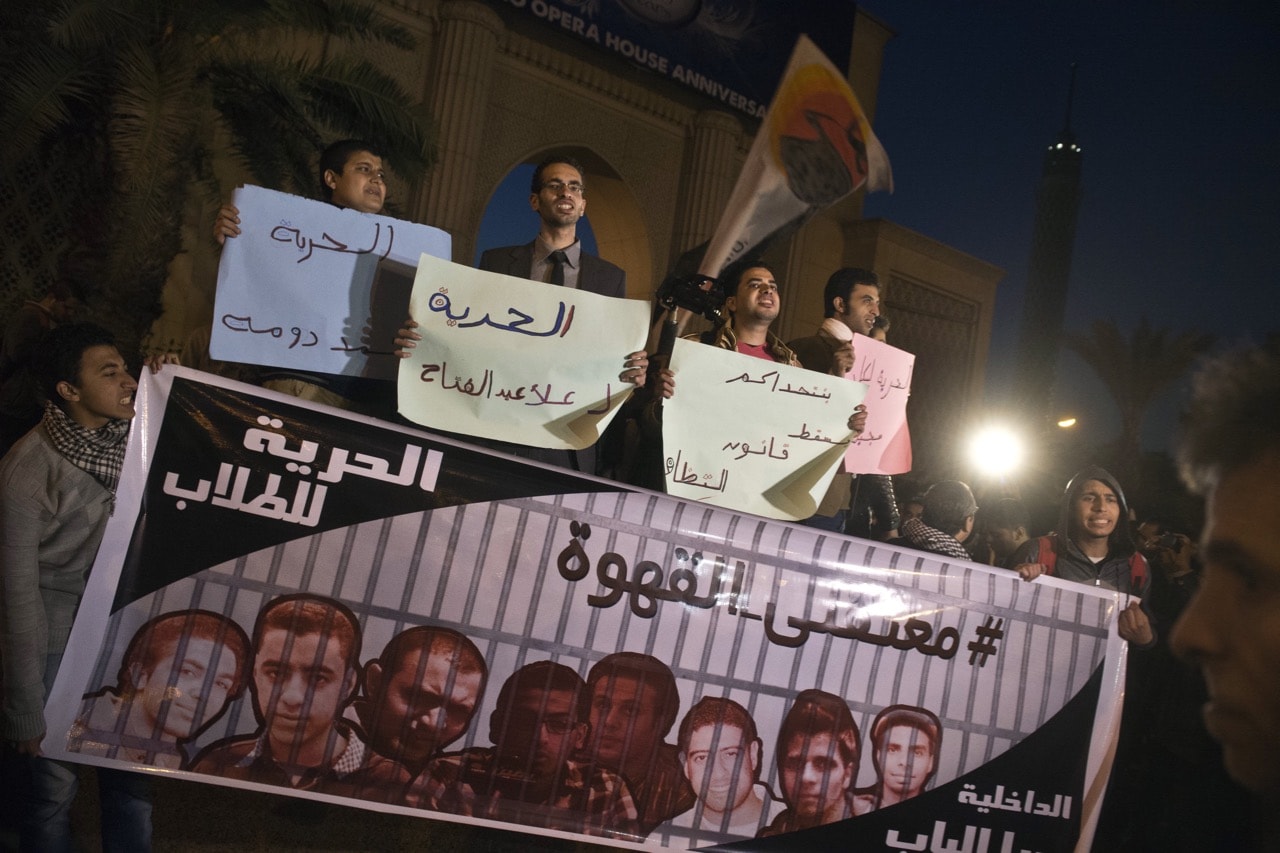 Members of the April 6 youth movement during a demonstration demanding the release of fellow activists, in Cairo, Egypt, 23 December 2013, KHALED DESOUKI/AFP/Getty Images

In its latest crackdown against the media in Egypt, the government are using excuses of 'fake news' to silence independent news outlets and journalists.

This statement was originally published on cpj.org on 28 February 2018.

Sadiq’s directive is part of a larger government crackdown on the media in Egypt ahead of scheduled presidential elections next month in which President Abdel Fattah el-Sisi is running virtually unopposed, according to media reports.

“The prosecutor general’s latest order means that the Egyptian government is putting its relentless campaign against journalists into writing, as well as stepping up the rhetoric that undermines trust in the independent media,” CPJ Middle East and North Africa Program Coordinator Sherif Mansour said from Washington DC. “If the government is truly conducting free and fair elections next month, then it should show that it has nothing to fear from critical reporting and rescind this order.”

The prosecutor general’s office did not immediately respond to CPJ’s request for comment.

After the prosecutor general’s announcement, Egyptian authorities arrested Ahmed Tarek Ibrahim Ziada and ordered the detention of Selma Alaa Eddin over their roles in the making of a critical documentary film in production, Minus 1095 Days, according to news reports. The two film producers are activists in the anti-government April 6 Youth Movement and were making the film as an attempt to rebut claims in a state-produced film, 1095 Days, which highlights el-Sisi’s accomplishments in office. They have both been charged with insulting the Egyptian state, according to the reports.

According to news reports, authorities were searching for several other April 6 Youth Movement activists involved with the film. The movement, formed in the wake of 2008 labor movement protests, was at the forefront of 2011 protests that toppled former President Hosni Mubarak and has since been active against el-Sisi’s government as well.

Egyptian authorities have been ratcheting up official rhetoric against international media outlets as part of its larger media crackdown. The BBC drew increased government scrutiny after the broadcaster aired and published a story on enforced disappearances in Egypt. The government-run State Information Service and the privately owned ONTV both ran reports that allegedly offered proof that the BBC’s reporting was false.

The government-run State Information Service subsequently ordered all “Egyptian officials and sectors of the Egyptian elite wishing to do so” to boycott interviews and meetings with the BBC until the network offered an apology. A BBC spokesperson responded by saying the broadcaster “stands by the story.”

In January, Sadiq ordered a criminal investigation into the New York Times after the paper reported that a senior intelligence officer ordered Egyptian talk show hosts to report positively on the U.S. decision to recognize Jerusalem as the capital of Egypt.

At least 20 journalists were behind bars in Egypt as of December 1, 2017, according to CPJ research, and more than half of those detained are charged with “spreading false news.” Human rights groups call on Egyptian authorities to stop the trials of TikTok content creators who are being prosecuted for their online content, and to ensure the right to freedom of expression. Five leading human rights organizations in the country call for the urgent implementation of seven necessary measures to end the unprecedented deterioration in human rights.