Junta accused of slowing, cutting Internet services ahead of elections

Myanmar (formerly Burma)
This article is more than 12 years old

Internet users are having their connections cut regularly and when working, they slow to a crawl, according to cybercafé owners and surfers.

(Mizzima News/IFEX) – October 27, 2010 – Burmese Internet users on the Bagan Net provider are having their connections cut regularly and when working, they slow to a crawl, according to cybercafé owners and surfers.

With little more than a week until election day, Burma’s Bagan Net internet service from Myanmar Teleport had been very poor for the past three days, they said, adding that they had no warning of impending difficulties.

“Bagan Net told us nothing . . . The Internet connection has been cut frequently but we can access local websites such as ‘Myanmar Times’ online and ‘People Magazine’s’ website. Although we could access our e-mail occasionally, after 10 minutes of use, the connection breaks down. Sometimes, we can use just about five minutes”, a cybercafé owner in Kyauktada Township, downtown Rangoon, told Mizzima.

An editor from a weekly journal told Mizzima: “I think that the closer we come to election day, the more often connections will be cut. I think their [the Burmese junta’s] intention is to block the flow of information out of the country. Not only Internet connections, but also phone links have been disturbed. People think the junta is doing it intentionally”.

Because of the poor Internet connection, the number of Net users had declined, another cybercafé owner said.

“Just a few people came to use the Internet. They used to use Facebook and Google Talk, but these days, they could not access them . . . my cybercafé has nearly been empty”, the owner from Thingangyun Township told Mizzima.

An Internet user said: “We can’t use the Internet. Some cybercafés were closed. One of my friends who needed a Departure Form [D Form] to go to a foreign country could not apply online as the government’s D Form site was down. We haven’t been able to surf other sites as well. I went to many cybercafés . . . but the connection was down at all of them”.

Web connections in Arakan, Kachin, and Karen states and Tenasserim, Mandalay and Sagaing Divisions have also been very slow.

A Bagan Net employee said that he was unaware of when connections would be restored.

An official in charge of the provider said connections were under maintenance, according to a cybercafé owner in South Okkalapa Township, Rangoon Division.

Since the monk-led “Saffron Revolution” of 2007, the junta has strictly controlled access to the Internet. During the anti-government protests that year, the junta shut down all services out of the country, claiming a break in an underwater cable.

Net users and observers have accused the junta of again disturbing services intentionally as the election, to be held on November 7, draws near.

Nearly 60,000 Burmese have their own Internet connections, according to figures from the Ministry of Communication, Post and Telegraph.

While Burma has been connected to the World Wide Web since 2000, the junta considers use of the Internet so threatening that just connecting can be seen, under its laws, as a dissident act. The military government restricts access using censoring software that blocks sites, especially free online e-mail and pornography. The government also charges exorbitant fees for access. 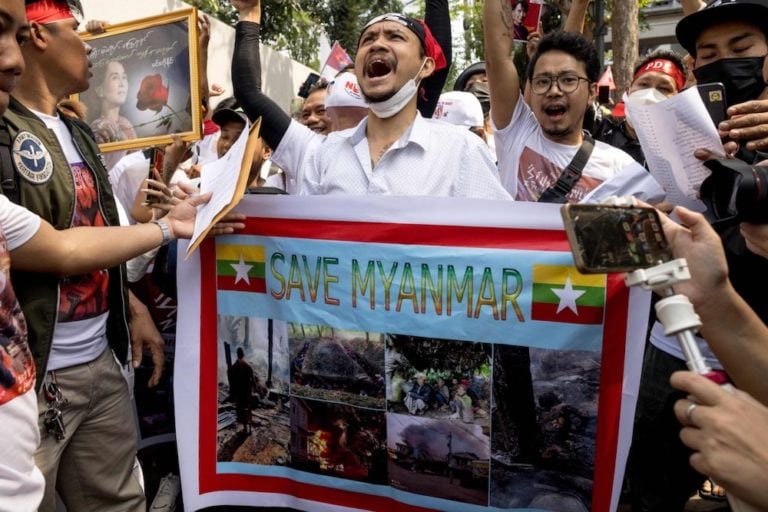 Myanmar sentences 8 journalists to years in prison, releases 6 others

The Committee to Protect Journalists described the jailing, sentencing, and granting early release to journalists in Myanmar as a “cruel carousel” and a “form of psychological warfare aimed at breaking the will of independent media outlets.” With 63 media personnel currently held, according to RSF’s Press Freedom Barometer, Myanmar is the world’s biggest jailer of journalists relative to its population.