The aversion to critical investigative journalism in Ghana Executive Director of Media Foundation for West Africa, Sulemana Braimah reflects on the accelerated decline in the safety of investigative journalists in Ghana under President Nana Akufo Addo's watch.

This statement was originally published on mfwa.org on 27 October 2022.

Our Executive Director, Sulemana Braimah, reflects on the deteriorating state of safety of investigative journalists in Ghana.

I started my journalism career in the year 2000 and remained a practitioner until 2009. The greater part of my practice was, thus, under the regime of President John Agyekum Kufuor. I worked for The Chronicle newspaper, starting off as a reporter and later as the News Editor. At the time, The Chronicle was undoubtedly Ghana’s leading investigative media organisation.

During the period, a number of major investigative stories were produced by journalists of the newspaper. There was a series of stories about forged signatures and dubious deals involving an MP who was also the Deputy Minister for Presidential Affairs at the office of the President. Following the revelations in the story, the said MP/minister had to resign.

Another story was on the issue of contract kickbacks. The then Chairman of the ruling New Patriotic Party was captured on tape telling party officials that the President at the time had been taking contract kickbacks and that monies were often carried in sacks and offloaded at the Presidency. The party chairman subsequently lost his re-election bid largely due to the story.

Then there was a major cocaine scandal in 2007, which implicated many top security officials. A Presidential Commission of Enquiry was subsequently established to probe the issue. In the end, some major decisions were taken.

There were indeed many other major investigative reports by The Chronicle and other media outlets during President Kufuor’s regime, which made the government unpopular in significant ways.

Ministers were routinely exposed for wrongdoing. At one point, there was a series of reportage to the effect that President Kufuor had had an extra-marital affair and fathered twins with a lady whom the government had engaged as an advisor. The story was run as a series with occasional supposed interviews with the said woman called Giselle Yazji. The President denied the allegations and the stories, but the series continued.

Such robust reporting was taking place just a few years after President Kufuor made the bold decision to repeal Ghana’s criminal and seditious libel laws.

At the time, the shadows of media repression under the military government and later the first NDC government still lingered; and other laws that could be used by the government to repress the media and intimidate investigative journalists remained in the law books as they are today.

Indeed, at the time, literally, every newspaper could fairly be described as an investigative newspaper even if some were partisan in their orientation. News was more of something being revealed or exposed, rather than the simple exercise of re-echoing what the President or Minister or MP had said.

There were a number of very hard-hitting opposition-aligned newspapers like The Ghanaian Palaver, The Lens, The Daily Democrat, among others, and their journalists operated without serious intimidations and limitations.

The situation of the safety of journalists did not change much under the regimes of Presidents Mills and Mahama. There continued to be robust investigative reporting with little to no manifest serious threats against journalists who produced such reports.

We can talk of Anas Aremeyaw Anas’ judges corruption scandal and his works on corruption at Ghana’s ports. We can also talk about Manasseh Azure Awuni’s stories on GYEEDA, SADA and the Ford gift to President Mahama.

In fact, the Ford story was published just a few months before the 2016 general elections. It had the prospects of negatively impacting the electoral fortunes of President Mahama, yet the journalist has repeatedly said he didn’t feel threatened at the time. There were several other damning stories by several other investigative journalists during the Mills and Mahama regimes.

In the last four years, however, things have changed and not for the better. The change is reflected in many indices including the latest Press Freedom Index by RSF, which had Ghana dropping 30 places in the global ranking – from 30th to 60th; and dropping from 3rd to 10th position in Africa.

This sentiment was re-echoed in RSF’s report on Ghana in its 2022 World Press Freedom Index report when it stated that “although the country is considered a regional leader in democratic stability, journalists have experienced growing pressures in recent years. To protect their jobs and their security, they increasingly resort to self-censorship, as the government shows itself intolerant of criticism.”

There have been several incidents that point to a deterioration in the state of safety conditions for investigative journalists in the country.

Examples of these incidents include the threat and subsequent murder of Ahmed Suale in 2019. He faced those threats and incitement of violence against him for his involvement in the production of Anas’ Aremeyaw Anas’ Number 12 documentary.

Edward Adeti, another investigative journalist, had to temporarily leave his base in the Upper East regional capital, Bolgatanga, for Accra, due to threats he received. The threats followed a story he did about the then Upper East Regional Minister, which eventually forced the minister to resign.

Multimedia’s Erastus Asare Donkor, has received several threats and endured statements of hate and incitement of violence against his person. The abuses and threats are simply due to his investigative works.

Apart from these few examples that are publicly known, over the last four to five years, several journalists have personally spoken to me about being threatened to drop an investigative piece they are working on. Journalists have played to me audio recordings of threats they have received for investigating particular stories.

Several others have spoken to me about feeling unsafe to pursue certain stories; while many others have talked about the heavy psychological and emotional trauma they endure simply for pursuing their career as investigative journalists.

Never in my combined 21 years of experience as a journalist and media freedom advocate, have I had as many investigative and other journalists speak to me about how unsafe they feel, how sad they feel about the fact that perpetrators of abuses against them are not punished; and how traumatising such experiences have been for them.

Causes of the Deterioration

So why are investigative journalists feeling more unsafe over the last four years? The reasons are numerous but I will proceed to highlight four of them.

The first point is that in the last few years, we have had a government that professes commitment to media freedom in words but appears to despise critical journalism. Officials of government, for example, say flowery things about the value of media freedom in a democracy, but in action, there is little to no commitment on their part to promoting the safety of journalists.

It does appear that what the Nana Akufo-Addo government loves is journalism that sings the praises of officialdom and not the type that is truly valuable in a democracy – watchdog journalism that empowers the people and holds officials accountable to the people. 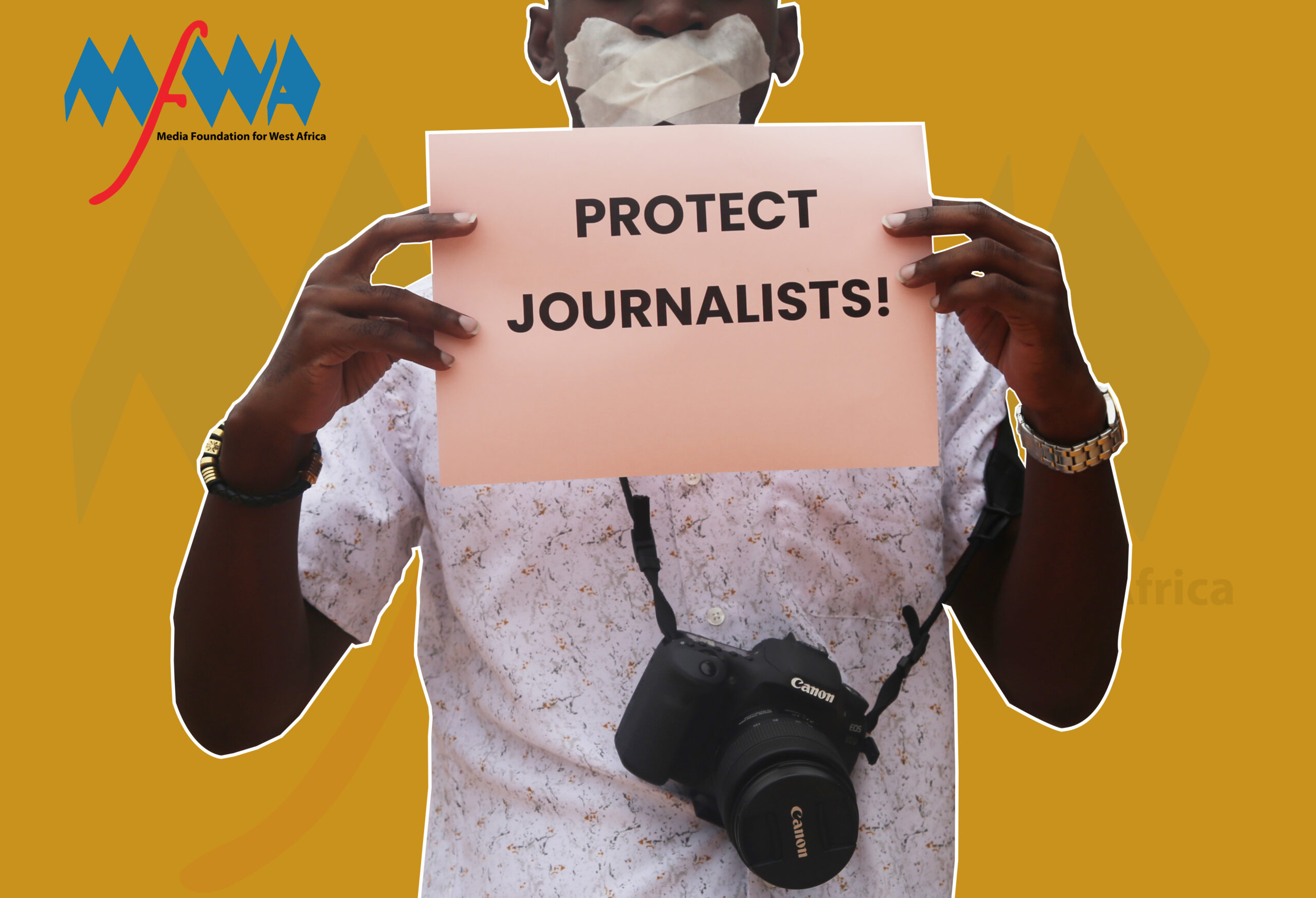 Ahmed Suale was killed, nothing has happened; Anas, Manasseh, Edward Adeti and Erastus Asare Donkor, have been threatened severally, no action has been taken against those who threatened them; Latif Idris was severely brutalised by police officers at the police headquarters, there is no action. The list can go as high as the level of impunity.

These and many more other incidents have only resulted in an entrenched culture of impunity for crimes against journalists. The situation has created the impression that if you are powerful or connected to power, nothing will happen to you if you abuse an investigative journalist or any other journalist under the pretext of protecting the interest of the government or the powerful.

The third point is the problem of reduced professionalism and trust in journalists generally. This is in part, due to the proliferation of partisan media; the dearth of public interest journalism and corruption in the media itself.

The fourth point is weak regulatory and other support mechanisms for promoting the safety of investigative journalists in Ghana. At the moment, Ghana’s media sector is largely unregulated. Even though the National Media Commission is independent and could do a lot to bolster the environment of safety conditions for all journalists, resource limitations and other factors have long constrained the Commission. The Commission is also largely powerless in terms of sanctions and enforcement. The Ghana Journalists Association (GJA) and other various industry associations have also lacked capacity and resources to robustly promote the safety of investigative journalists in the country.

Generally, the consequence of the deteriorating state of safety of investigative journalists in Ghana has become manifest. It is, therefore, not surprising that we are seeing less and less critical, public interest, investigative journalism being done in Ghana. Doing such journalism is increasingly becoming a dangerous enterprise. But that is the kind of journalism that strengthens democratic governance, empowers people and makes societies prosper.

When we say journalism is critical for transparency, accountability and democratic governance, we are not talking about praise-singing journalism or the type of journalism that simply serves as a megaphone for the political class and the elite in society. No.

The type of journalism that keeps democracies alive is the one that serves the interest of the powerless by holding the powerful accountable; the type that exposes wrongdoing and gives a voice to those whose voices cannot be heard. Under the current context, it is becoming quite challenging to do the type of journalism that holds power to account.

But we need to persevere even if it’s at the peril of our lives. That is because we cannot claim to love democracy and hate the kind of journalism that makes democracy thrive. When such journalism dies, democracy dies.

So, we need to confront the current challenge boldly and resolutely. That is why, the Media Foundation for West Africa (MFWA) is strengthening its safety of journalists and media freedom work in Ghana and across West Africa.

That is why we have also started the Next Generation Investigative Journalism (NGIJ) Fellowship, aimed at grooming young, enterprising journalists and equipping them with the required skills and mindset for doing public interest investigative journalism even in the face of repression.

We do recognise that many other individuals and organisations are doing their part to keep critical, watchdog journalism alive. But certainly, we need to mobilise more to do more. The need to support individual courageous journalists and independent media organisations in Ghana has never been more paramount. In what can be described as a major victory for media freedom, Ghana’s Human Rights Division Court orders the heads of three major state institutions to apologize to journalist Emmanuel Ajarfor Abugri, for violating his rights. Impunity over Ahmed Suale’s killing is a blot on Ghana’s press freedom record and a dismal emblem of the steep deterioration of press freedom in the country. Members of Ghana’s judiciary and legislature compelled to declare assets

Ghanaian accountability investigative project interrogates state institutions on the extent to which their staff complies with the country’s RTI legislative requirements.