Website editor to be tried on charge of insulting president

Baris Yarkadas will face up to five years in prison when he appears before an Istanbul criminal court.

(RSF/IFEX) – Baris Yarkadas, the editor of the online newspaper Gercek Gündem (Real Agenda), will face up to five years in prison when he appears before a criminal court on 3 March 2010 in the Istanbul district of Kadiköy in response to a complaint brought by the president’s office. He is charged with insulting President Abdullah Gül under article 299-2 of the criminal code for failing to remove a comment posted by a reader.

“We call for the immediate withdrawal of this baseless charge,” Reporters Without Borders said. “It is incomprehensible that Yarkadas should be accused of insulting the president when he did not himself write the comment, which was anyway neither rude nor insulting. This prosecution is indicative of a desire by the government to intimidate and silence its critics.”

The president’s office has even said it knows who posted the comments, referring to him as “the aggressor” and revealing that he lives abroad. The reader accused President Gül of allowing his Armenian counterpart, Serzh Sargsyan, to defy him. “Bravo, you have trampled on the honour of the great republic of Turkey,” he wrote.

Yarkadas is facing other prosecutions. He is due to appear before the same court on 5 March on a charge of offending Nur Birgen, head of the Institute for Forensic Medicine’s expertise section, by reporting allegations that human rights NGOs have made against her. 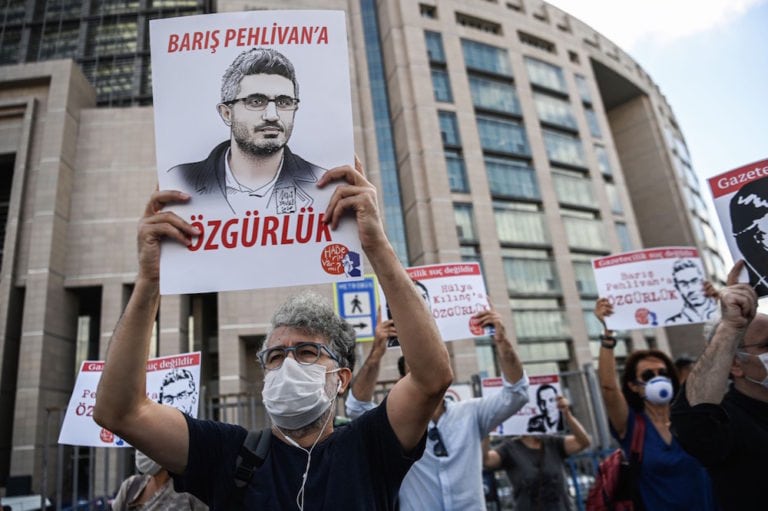 New report on Turkey: 213 journalists stood trial in first four months of 2021; at least 68 were in prison

Expression Interrupted, a project undertaken by the P24 Platform for Independent Journalism, has published the first of its regular ‘Freedom of Expression and the Press Agenda’ reports. Altan and his co-defendant Nazlı Ilıcak, whose conviction was also overturned, were sentenced in November 2019 to 10 years and 6 months and 8 years and 9 months in prison respectively, on the charge of “aiding a terrorist organization”.